The first circuit on the page Electronics - Robust Design methods (AL0016-01x) probably would do the desired job well. But if higher resolution and frequency were required the idea below could be developed. This circuit is more likely to be a starting point until a better solution comes to mind?

* In any case I've included this solution to emphasise the point (my website electronics first page) that a working solution on paper even if big is a good starting point.

There is a large data throughput to processor and/or send wirelessly. I have also included further refinements of the peak detector (discussed in other pages). The peak-detector condenses data throughput but also reduces the amount of data available.

****************************
The function block below is a mixture of circuit and block diagram and is a general purpose diagram for a range of non-analogue processing possibilities. They all look feasible in that the component count is reasonable. The choice is based on a requirement for a quick design and easy design but not necessarily costly.

I abandoned this investigation at this stage to consider using more of a sledge hammer approach;
In another real application any one of these ICs did or would do the job well; FXOS8700CQR1 NXP six axis sensor, LIS3DH ST, FXLS8471Q that are three axis and many others would also do the job.

These solutions use more components than I had allowed myself. They also show other avenues and possibly are better solutions - I do not know for certain as I have not worked out a satisfactory explanation for what has been observed by modelling. 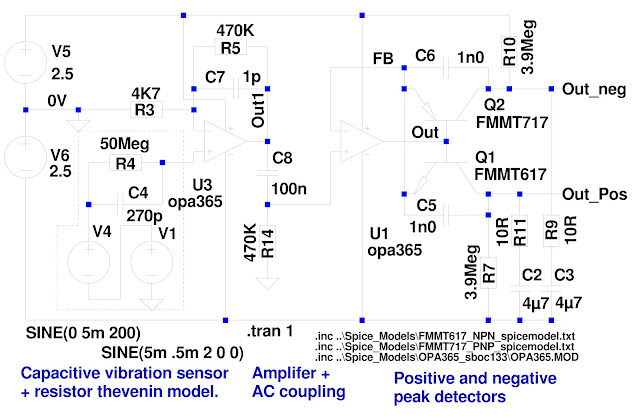 The circuit above (AL-0020-02G) was created using LT spice IV. This circuit does not use any LT spice model parts, other than generic passives and discrete; Diodes Ltd, diode and bipolar junction transistor spice models all work. The circuit is novel and demonstrates some useful features of BJT's. An LT op-amp such as; LTC6088 works a little better in this circuit than the Texas Instruments op-amp shown, which in some cases can fail to model and reports timing step too small U3 but even so the TI model is much better than the MCP651 Microchip model. Both op-amps have a very similarly specification but the LTC6088 is a lower bandwidth op-amp. LT Spice forum suggestion is that where a non-LT model does not work then use the ideal model.

Variations of this circuit have also been modelling using Tina-TI and a free version of SiMetrix and they all produce comparable results. The simple AC coupling to the positive input of the peak detector stage is very beneficial over other alternatives I show on the link below. As before the design is not trivial and there is some artistic judgement necessary in the design.

I have added an output buffer below to the models based on those in other blog pages. 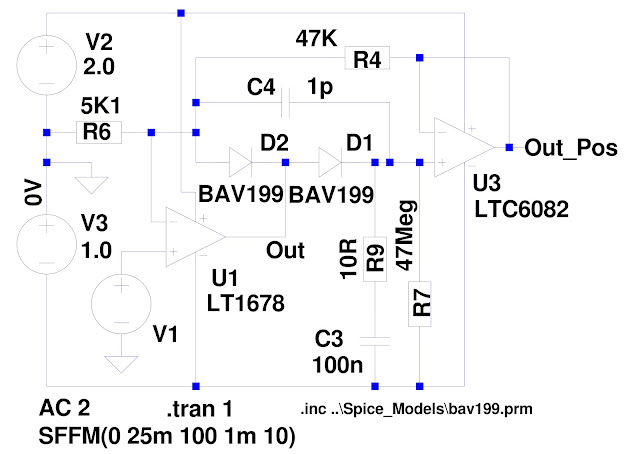 This circuit uses mostly LT spice model parts but the diodes use an NXP spice model. The circuit is widely used and this particular version has been refined some more using SiMetrix modelling tool and copied as a LT Spice which produces comparable results. The desired MCP651 Microchip op-amp model does not work in LT Spice IV but a Texas Instruments OPA365 and also the Linear Technology op-amps shown work fine. (AL-0020-01C)

The design is not trivial and there some artistic judgement involve see artistic design discussion at;


A conventional solution is usually best.
Based on diagram on another page but with the output buffer added. These extra parts makes the model slow to simulate.

The circuit below demonstrates another point, that is; Do not include more function blocks in your simulation than you need. The amplifier stages around U2 and around U5 are trivial and without those circuit blocks this circuit, which is set to run a virtual 5 seconds, is resolved in about a minute and that is comparable to other tools. When U2 stage is added the circuit needs to run for longer on the PC for many minutes but with both U2 and U5 LT Spice was unable to resolve simulation using default setting in many hours. LT spice IV is fine in my opinion but I wanted to show an obvious point for myself, do not model more than is necessary. In this case those two amplifier stages can be modelled using pen, paper, and a calculator and in the simple buffer case by simply inspecting the op-amps data sheet and that will result in a properly understood and better job carried out more quickly. 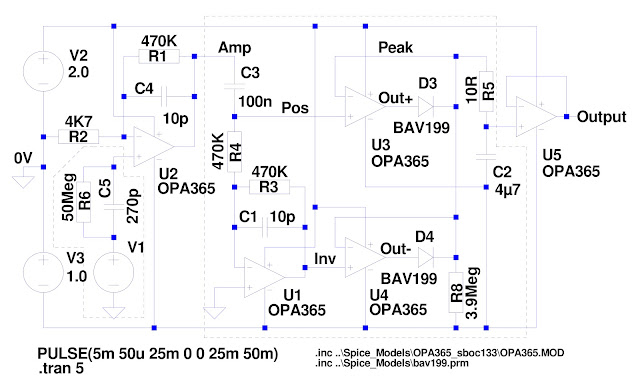 In summary the conventional circuit is the best. This circuit with one diode rather than two diodes therefore relies on the op-amp coming out of saturation quickly - the only clue that that mighty be fine is that a similar circuit is shown in the data sheet but there is not a spec. point in the data-sheet on how well the op-amp comes out of saturation. In any case many low voltage op-amp's output's do come out of saturation quickly. I have also modelled this with Tina-TI 9 and the circuit also models fine. (AL-0020-05B). 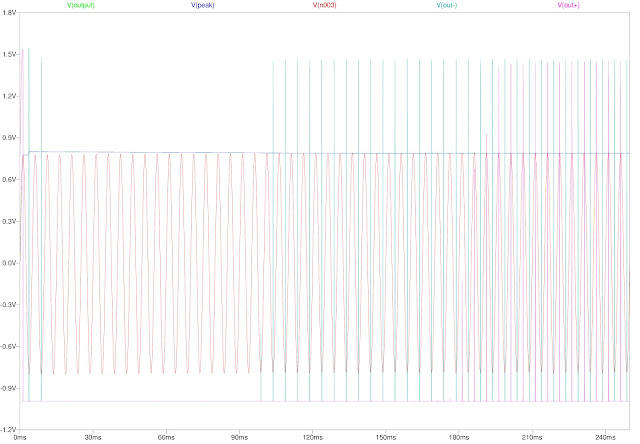 This shows you how the outputs from simulation is presented (AL-0020-05A).