Be careful when creating new models it is very difficult to get rid of them or replacing them if they are wrong. I think I managed eventually but there is no help on that point in version 6.20. I believe that ADI's simulator isd based on SiMetrix and they also support LTspice but I do not know how that will change now that Analog Devices now own Linear Technoligy.

Some of these circuits functions have also been modelled using; LT Spice IV


The proposed peak to peak detector;

There is a problem with the transistors in this model. The circuit requires the model to operate with some currents below the values that are specified in the data-sheet. An alternative and better explanation is that the inter-electrode capacitances of the transistors couples a false feedback signal and that results in  the peak detection not occurring. The problem is apparent because the transistors E-C voltage drop is higher than 1mV expected. (SiMetrix AL-0017-03F)

The transistors have an inter-electrode capacitance of ~20pF so in AC terms all electrodes are connected together. That inter-electrode capacitance is small in comparison with the output load but large in comparison with the feedback. This is, conversely to the reasoning above, likely to be useful in making the transition in polarity smooth. The circuit is limited potentially by the number of components possible on the PCB and simulation is limited by SiMetrix but that is no so severe.

The design is not good initially but this circuit, the b-c voltage drops when the transistor is on looks wrong. Red is the positive output. Other waveforms are lost. The Blue is the op-amp output.

The diagram above is for; +-25mV 2.5mS rise fall and width input x10 as the previous graph.

I have zoomed in around where the output settles to about the expected value.

As before the circuit is not working at this scale we can now see that the transistors do not switch on and charge the capacitors although there is adequate base current for this to happen. There is not adequate emitter or collector currents. I do not think the model operates correctly with some of the transistor currents below what is specified in the data sheet. Specifically operate below collector, emitter currents and the specified hfe values given data sheet.

More-or-less the same circuit but for the use of a Texas Instruments operational-amplifier. The model now works over a significant signal range but with unacceptably low value feedback resistor. This compromises is usefully because we can see some more characteristics of this function and it is all as expected. (Tina-TI AL-0018-03B)

The Tina modeller shows function where the SiMetrix does not but gives a warning. The models are use different for the transistors and but also the Tina-TI is not limited in capacity and both points are significant. These transistors operate at particularly low current and very flat gain characteristic, are low noise and low leakage current but the saturation voltage is not good and is not specified at low current.

These alternative transistors BC849 and BC859 have specified gain to a lower current but do not have a good and specified saturation voltage at low current by comparison. So there is limited some value in putting them in the model. It is a just to see what happens step - which can be very enlightening.


TLV7211 CMOS comparator would also do the job but there is a benefit in using a an op-amp that the slower means there would be less noise in this function block. Modern rail-rail op-amp's work reasonably well as comparators but take care this can make the output very slow when coming out of saturation but that restriction is rarely the case in newer op-amps. The additional op-amp has allowed the circuit resistor R9 to be increased to 10M instead of about 10K and this prevents significant current being drawn out of the holding capacitors C5 and C6. The extra comparator makes the simulation look alright.

The circuit has now become more complex and the main point of developing this novel design was to minimise the component count. It now theoretically achieves all that is required although not over a wide temperature range.

A nearly conventional solution (below) works best and is a safe choice although it uses more components. The transition is not so smooth during signal polarity change as with the transistor circuits. This circuit has a lot of latitude for optimisation and improvement by comparison and is more model-able because components are all working within parameters specified in the data-sheets. For example the hold capacitor could be smaller making the frequency response higher. The circuit does not show the first amplifier.

See below the diagram imediately below is the circuit that this circuit is derived from.

The peak detector circuit above is derived from precision signal rectifier below. - This function is not useful in this case. See below; 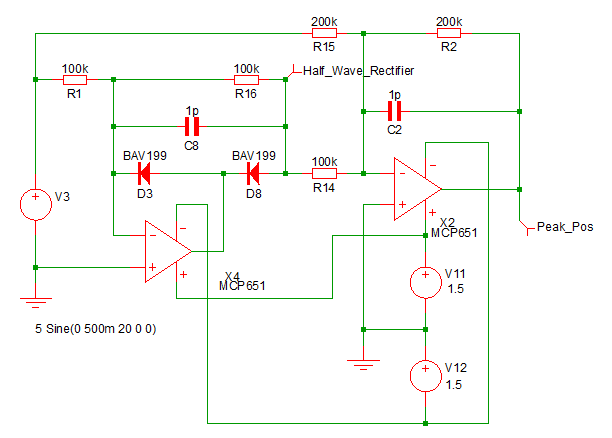 Look at that first should help explain how it works - Output is; Halfwave output is x2 - x1 the input. C2 is 1pF and is for circuit stability but if increased to 100nF would change the function to rectified and average. 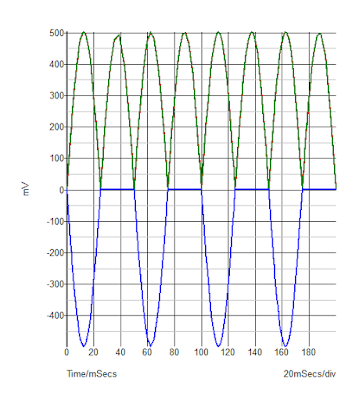 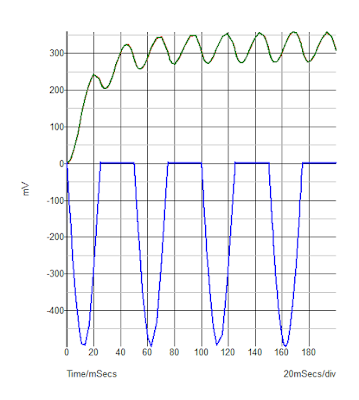 Conclusion;
The last diagram may not be useful in this application. The application was for various sensors on a machine so peak vibration probably will be more useful in warning of failure or maintenance required. More likely simply connecting the output of the motion sensor amplifier to an A/D input would give more detail because it is raw data so that a noise spectrum analysis could be so you may determine individual part failure eg bearing failure in a micro-wind turbine. This is as the first circuit on the theoretical example page is implemented.