Changed; 03/05/2020 to 06-05-2020
Objective;
To discuss the electrical issue with some textbook motor and generator theory.  I do not have a dynamo to experiment with yet.  All so-called dynamos are really AC generators they have no brushes and they are identical to many electro-mechanical mains voltage timers motors such as used to be used in central heating timers.  Some such as a hybrid stepper motor which produces alternating current in a number of phases and at low speed.  This type of motor or generator is called a Permanent magnet synchronous motor or generator.

At the bottom of the page, there is a bicycle dynamo light and battery manager with a speedometer design idea.  It interfaces by USB cable. 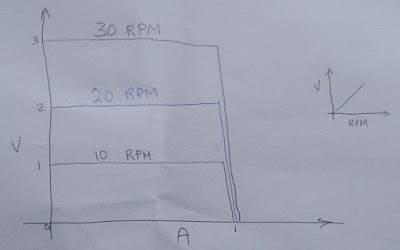 Graph - Current can be drawn up to the same limit irrespectively of the generator speed and then the
voltage will drop sharply.
Small graph - With no load, the output voltage increases linearly proportionally to the speed of rotation.

Risk of the magnet demagnetising;
The magnet will demagnetise if separated from the armature so if you remove the armature you need to replace it with a keeper such as another armature.  A magnet keeper is a piece of soft iron that conducts magnetism very efficiently.  Mu-metal that transformers,  motors, generators and the screen on old colour TV CRT use is ideal.  The metal should not be bent or hammered because this hardens the metal and reduces the metal's desired qualities so you should minimise the amount of work you do on the metal.

A dynamo hub bearings can be serviced without separating the magnetic parts the magnet and the winding so a keeper may not be required.  Although the amount of cleaning will be limited either way. 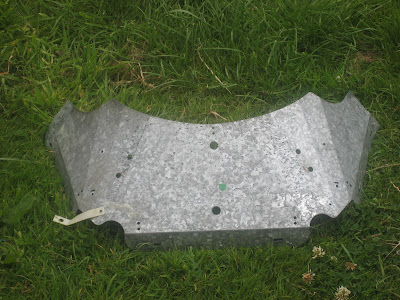 The Plan;
To cut a piece of mu-metal and carefully bend it into a radius.  In more detail like a C shape but more like a G shape with a small gap so that the metal can be shrunk to fit it then expand into the cavity where the armature was.  The G shape so that there is a tale that can be pulled on to unstick and remove the keeper.

The estimate of the dimensions;
Apparently, there are many different size hub dynamos.

*** It turns out the estimate from photos is wrong and a GH6 or GH8 hub distances between the bolts is 75mm. So the keeper will need to be about 70mm diameter. ***

I understand that all post-world war two dyno hubs and gear dyno hubs are the same and parts interchangeable. The external appearance changed from time-to-time though. 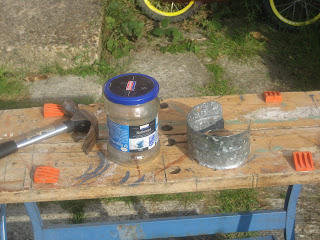 Picture - Making the keeper by finding a glass jar of about the right
diameter, wrapping it in a rage then bending the mu-metal around the jar.


Dynamo magnet keeper's;
I have some mu-metal and have cut a piece 30mm x 260mm x 0.5mm - it looks messy because I used kitchen scissors and it would be better cut with a guillotine to make a magnet keeper for a GH12 hub-dynamo. My plan is to carefully bend into a C shape radius. Actually more like a G so that there is a tail facing in to pull it out with.
I will cut more pieces for other old dynamo types but I need to know the internal circumference (diameter x pi) so if you tell me the diameters. Otherwise, if you have a way of cutting soft steel I shall bring the whole sheet to cut.  Then I can return home with what is left.

1. With the bike wheel off the ground so that it can be spun freely;
2. With the wheel removed from the bike and the bearings set properly;
If the force was different as described the magnet is magnetised and the dynamo is good or the magnet is could be week.

If there was no difference then;
If there is doubt about the lamp and the dynamo circuits test the lamp circuit with a battery instead of the dynamo.  Of cause, you can test with a multimeter rather than traditional methods but a multimeter in its time like an AVO might cost more than a new bike in the 1930s.  The current from a resistance meter if connected to the dynamo will cause a small high voltage spark when you disconnect it (called back-EMF).

The second tool rematerialising the magnet;
This is the same process that happens with a computer hard disk.  A very high pulse of magnetism is applied to the hard iron material to magnetise it.  Such a pulse will also switch a magnets polarity north and south poles. This is done with the dynamo fully maintained and assembled then briefly connecting a high current from a voltage power source to the armature.  The risk is the high voltage could cause the armature winding if it is weak to break down and fail but in that case, the armature was probably going to fail anyway. 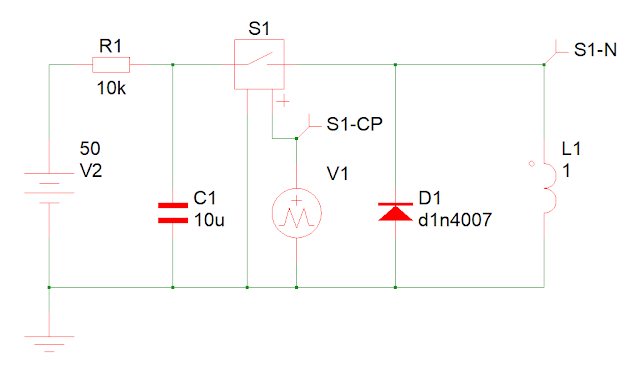 AL-0030-01A C1 is trickle charged from a high voltage.  When S1 is closed a pulse of increasing
current is connected to the dynamo winding represented by L1, 1H.  D1 prevents the circuit from
creating a high voltage, ringing (oscillating), arcing and demagnetising the briefly magnetised
magnet.  The voltage and component values are to be determined.  The Ground connection
shown is not earth but is a reference point for simulation.


In due cause, I will make a re-magnetising circuit using a high voltage trickle charge circuit with a capacitor and a diode and a switch.  How it works is that it produces a high current pulse - standard physics stuff but I need to experiment to find out how high the current needs to be?

The device will of-cause deliver a dangerously high voltage.

The high voltage discharge circuit above could be replaced by a DC power supply such as a car battery charger.  The charger is connected to the dynamo then in a different method, the dynamo shaft can move freely so that the magnet poles align when the pulse of magnetism is applied.

Next step is as before switched on for 1/10 second then off but 1 second would be okay.  Take care to switch off quickly so that the dynamo winding does not heat up.  Do not disconnect the dynamo whilst the power is switched on because a high voltage, called back-EMF, will be generated that will put the winding under stress unnecessarily.  See diagram below;

AL-0030-01A The car battery charger has an internal rectifier diode so another diode is not required.
Connect up then switch on for 1/10th second to 1 second then turn off.  The setting of the low or
high charge switch will make little difference other than to limit the armature heating.


What happens; The armature (generator winding) of the dynamo (generator) will move and the magnet poles and armature segments will align or re-align as the current and the magnetism increases. The field magnet normally moves but this is stationary and will be magnetised.

Microcontroller based bicycle dynamo light and battery manager with a speedometer.  Design idea and exercise with STM32 microcontroller.   With interface by USB cable for speedometer display.

Link to CADSTAR 18 and STMCube files Draft more to follow.

AL-xxxx-xx -- minimum LED lighting,  does not require PCB and can be made using Veroboard.  (to follow)

Improved LED efficiency can be achieved by using a boost switch-mode current driver.  Some of these can be driven from a pulse-width modulated power supply for dimming power saving.  For example;  Diodes Ltd - Low voltage led drivers

Posted by Andrew Lohmann at 13:43 No comments: Links to this post